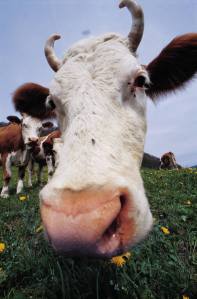 I first became interested in the use of antibiotics in food when my young daughter had  a seemingly untreatable allergy of itchy hives. After all the tests and investigations did not show the cause, the allergist said: “Maybe it is the penicillin the milk.”

As a mother and newspaper reporter I wanted to know how penicillin got in the milk.

The doctor said:” Well the cows are treated with penicillin for mastitis (infected udders). The farmers are supposed to throw the antibiotic containing milk away but milk is pooled from a number of farms and it is very difficult to find out who put the penicillin in the pool.”

That was in the early 1970s  and my daughter is now the mother of grown children. I have been reporting on antibiotics and other additives in food since then. My Consumer’s Dictionary of Food Additives is now in its Seventh Edition.

Although President Obama signed an executive order September 18 directing agencies to carry out a new strategy to curb the misuse of antibiotics, penicillin is still being found in spot checks of milk and in other products we eat and drink.

The Food and Drug Administration has started a voluntary plan for pharmaceutical companies to stop promoting antibiotics just for increasing the weight of animals. The FDA also now requires veterinarians be involved in treating animals who may need antibiotics because of illness or to prevent the potential spread of the illness of a sick animal to the healthy others in the flock or herd.

Estimates are that today 70 percent to 80 percent of total US antibiotic production—25 million pounds–  are still fed to chickens, pigs, and cows for non-therapeutic purposes like growth promotion and weight gain. Far more antibiotics are given to animals then humans.

Humans are also subject to overuse of antibiotics. The New York Times in its recent editorial about “A New Attack on Antibiotic Resistance” pointed out there are 23,000 deaths and two million illnesses in the United States each year from antibiotic-resistant bacteria..

The Preservation of Antibiotics for Medical Treatment Act of 2007 (PAMTA).was introduced by Louise Slaughter (D-NY), a microbiologist. It amends the Federal Food, Drug and Cosmetic Act to withdraw approvals for feed-additive use of seven specific classes of antibiotics: penicillins, tetracyclines, macrolides, lincosamides, streptogramins, aminoglycosides, and sulfonamides. Each of these classes contains antibiotics also used in human medicine. The cancellations automatically were supposed  to take effect in 2009 unless, prior to that date, the antibiotic’s producer demonstrates to a reasonable degree of certainty that use of the drug as a feed additive does not contribute to development of resistance affecting humans. The antibiotic ruling died in the wasteland of some committee. Her efforts re-introduce the bill several times also had the same outcome:  Lost in committee limbo.

You can make up your own mind if antibiotics will be curbed on the farm. I merely point out who is opposed to the antibiotic regulations.

The meat and poultry industries are opposed to the antibiotic amendments. The meat and poultry industries are estimated to generate over $850 billion annually, which represents about 6% of U.S. Gross Domestic Product (GDP). The pharmaceutical industry is also opposed to increased regulation. Pharmaceutical companies agree with the meat producers and poultry producers that existing guidelines and regulations regarding drug approval and antibiotic use in farming are sufficient. A number of pharmaceutical companies including Bayer, Novartis, Pfizer, and Eli Lily and Company are members of the Animal Health Institute, which lobbies against legislation to restrict antibiotic use. The total lobbying expenditures of the Animal Health Institute over the past ten years range from $30,000 to $200,000 each year. While it is difficult to assess political power, many of the groups opposing the legislation have the money to protect their interests regarding the use of antibiotics in food production in the United States.