One of my prescription medicines for allergy, a nasal spray, had long been covered by my insurance. When I went into the pharmacy recently to pick it up, I found I didn’t need a prescription. A similar spray recently became over-the-counter (OTC). The RX version had been covered by my insurance but I had to pay $27 out-of-pocket for the OTC product. Both versions had a similar steroid ingredient to reduce inflammation. Both carried the same warning: “Nasal sprays can help relieve nasal symptoms but they should only be used for a limited time without talking to a health care provider. If some nasal sprays are used longer than intended they can make the congestion worse.” 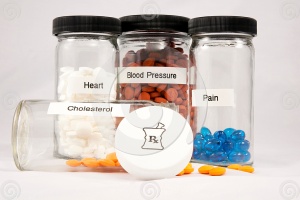 Proponents of RX to OTC say it reduces costs and you don’t need a visit to a health care provider.

FROM RX TO OTC

Over-The-Counter (OTC) terminology is comparatively new. In 1972, the US FDA introduced the concept for medications you can buy without an RX.  But what does Rx really mean? The website ASK History (http://www.history.com) says according to most sources, Rx is derived from the Latin word “recipe,” Among several alternative theories, however, one belief is the Rx symbol evolved from the Eye of Horus, an ancient Egyptian symbol associated with healing powers. What is known for certain is that the practice of pharmacy, the preparation and dispensation of drugs, has been used for thousands of years. The world’s first recorded prescriptions were etched on a clay tablet in Mesopotamia around 2100 B.C. while the first drugstores were established in Baghdad in the eighth century A.D Prescriptions written in stone may be available for thousands of years but a drug patent today lasts from 17-20 years. When a patent is about to expire, most of the time the original the developer tries hard to tweak the drug or use legal loopholes to delay the generic versions. When that proves fruitless, the original developer and its competitors may obtain OTC status for the drug. Often the newer drug less potent, less expensive and more widely available so profits will continue. Not all brand-name or generics become OTC. Some remain RX but  are cheaper due to market competition. Today,  however, the price of generics has been rising nearing the price of the original product. The theory, according to a recent observation in The New England Journal of Medicine, is the sudden sharp increase in generic drug prices is a function of several factors combined with:

The FDA approves most OTC drugs—whether they were once RX or not– if the compound follows a recipe (monograph) similar to the original and does not contain known harmful ingredients. WHAT ABOUT COMBINING AN RX AND OTC DRUG? Often a bad idea! Patrick J. Skerrett, Executive Editor, Harvard Health, posted in 2012:“Mild and relatively uncommon, interactions involving OTC drugs can produce unwanted results or make medicines less effective. It’s especially important to know about drug interactions if you’re taking Rx and OTC drugs at the same time. Some drugs can also interact with foods and beverages, as well as with health conditions such as diabetes, kidney disease, and high blood pressure.

WHY ARE YOU TAKING AN OVER-THE-COUNTER MEDICINE? Impulse when you saw it in a store? A TV commercial or a popular article about the product influenced you? Your friend or your health care provides recommended it? Proceed with care because OTC does not necessarily mean Only Take Casually. The FDA says about OTC drugs: The result of the change in consumer habits is that prescription, over-the-counter, homeopathic, and herbal medications’ overuse, misuse and abuse have reached almost epidemic proportions. People experiencing acute drug reactions ranks seventh among the causes of hospitalization at a cost of more than $21 billion a year. RX and OTC nonsteroidal anti-inflammatory drugs (NSAIDs) alone are used by 13 million Americans and cause more than 7000 deaths each year. An estimated 40 percent of patients don’t take their medications as directed. The Agency also warns: Over-the-counter (OTC) drugs play an increasingly vital role in America’s health care system. OTC drug products are those drugs that are available to consumers without a prescription. There are more than 80 therapeutic categories of OTC drugs, ranging from acne drug products to weight control drug products. As with prescription drugs, CDER (Center for Drug Evaluation and Research)   oversees OTC drugs to ensure that they are properly labeled and that their benefits outweigh their risks.  CDER, which is part of the FDA, is also responsible for biological therapeutics and generic drugs, fluoride toothpaste, antiperspirants, dandruff shampoos and sunscreens — all considered “drugs.” Food and medical devices are also inspected by the FDA so you can understand why the Agency is often overwhelmed. OTC and RX regulations are not carved on a stone tablet— the regulations often change status—sometimes depending on which company has the most talented lobbyists. Therefore think before you swallow an Rx or OTC medicine, especially if you are taking both. You can find information on many sites including: www.Fda.gov ; http://www.webmd.com  and www.drugs.com. The sites give information about Rx and OTCs and of the effects and side-effects. They even provide cautions about combinations of OTC, RX and food.